Curious about your Family History - we can help 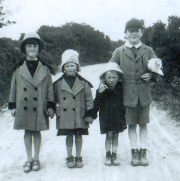 Wanting to know more about your Family History? It can be a bit intimidating if you are just getting started. Why not let us help?

From starter packages to commissions tailored exactly to your requirements, our professional research service specialises in tracing Welsh ancestors, as well as the Home Counties of England. Located in London and West Wales, we are situated close to major collections such as The National Archives at Kew in SW London as well as The National Library of Wales in Aberystwyth

We can help you find out more about your ancestors and their descendants, the areas that they lived in, and will also provide you with a historical timeline including the major political, social and cultural events that shaped the world in which they lived

Gill Thomas is also an experienced public speaker and runs courses at the Society of Genealogists in Tracing Welsh Ancestors.

Review of the course, ‘Tracing Ancestors in Wales’ by Gwyneth Wilkie

This was a subject which clearly attracted many of our members. Gill Thomas is a professional genealogist who has chosen to call her agency, ‘Who What Where Research’ and the same clarity of purpose was evident in her talk.

It is widely understood that legislation applied equally in England and Wales, but Gill took us right back to the Middle Ages to see how the records had been affected by the division of Wales into principalities and marches. Only under Henry VIII was Wales divided into counties and only in the twentieth century did it become a separate political entity.

Wales has, however, always been proudly different. One classic problem is the use of patronymics instead of surnames. Here some hope was offered by the use of John and Sheila Rowlands’ Welsh Surnames which can help attach names to certain areas of Wales. Guidance was also available on decoding monumental inscriptions in Welsh.

A general survey of records followed, as all these resources may have to be brought to bear to distinguish bearers of the same name from each other. We were equipped with information on starting-points, from manorial records to modern industrial repositories.

Great attention was paid to the various administrative divisions, not only unitary authorities, but diocesan and legal as well. several examples were given of records turning up in unexpected places, so that searching for them needs to be thorough. Who would expect manorial records for parts of Wales to turn up at the University of Nottingham or Longleat House?

Attention was also given to the history of Welsh industries, nonconformity, the army, navy and merchant navy and to patterns of emigration.

Emphasis was also put on taking advantage of local knowledge, particularly through the local family history societies, but not forgetting published sources. Gill supplied us with an extremely useful and well laid out handout.

The talk left us much better equipped to tackle the specific problems of researching records in Wales. It was also an interesting demonstration of how the questions Who? What? and Where? can often be much more efficiently answered by taking a step back and looking into the creation and history of the relevant records.

The time seemed to go all too quickly, but it was a very well spent morning

(This article was originally published in the Society of Genealogists newsletter).