JONES is the surname that occurs with greatest frequency in Welsh Family History. When you factor in the different versions, such as Johnes, Johns or Jones it can be challenging to say the least, in trying to make a reliable interpretation of the information available. For example, there are 36 registered births for babies called Mary JONES in the county of Cardiganshire in 1870. (This compares to the whole of London where there were just 5.)

On the maternal side, his mother Elizabeth Ellen JONES, was part of the extensive family of David JONES, blacksmith of the Lion, Bettws Evan, and his wife Hannah THOMAS. 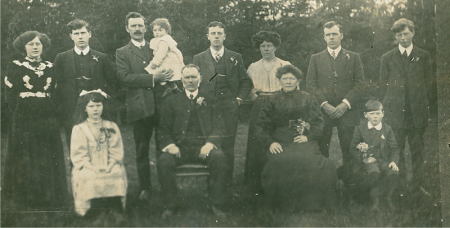 On his paternal side, Benjamin Arthur THOMAS was from the Thomas family of the Green, Glynarthen. His father Samuel THOMAS was a Tailor descended from farming stock, and his mother Hannah JONES was a descendant of the JONES family of Penrallt. The Joneses were a leading family of landowners in Bettws Evan and Llangoedmore, owning many properties such as Dinas, Penrallthebog; Pantyronen; Pantybettws; and Glanmedeni. Walter JONES was a poet in the Bardic tradition - Gwallter y Gelltyd.

Chief Officer Benjamin Arthur Thomas was lost at sea in February 1941 when his ship SS Alnmoor was torpedoed approx. 400 miles west of Rockall en route to Glasgow from New York. He and other crew members are remembered at the Tower Hill memorial. Elizabeth Ellen died not long after and is buried at Glynarthen chapel.